"This association, formed in 1894, has its history yet to make." 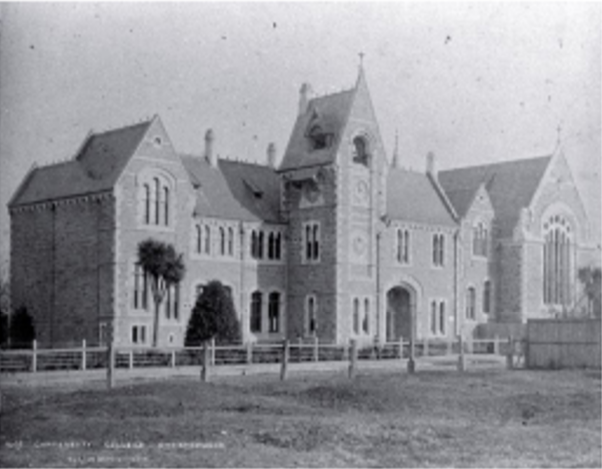 Canterbury College was established in 1873. Unlike many other colleges around the world, Canterbury admitted male and female students from the day it opened.

The college resided within the buildings in the central city clock of Worcester, Montreal, Hereford and Rolleston, now known as the Arts Centre. These Gothic Revival buildings, typical of Canterbury architecture at the time, would be home for the college for decades to come.

As the student population grew, the role of clubs and societies became essential in the creation of a sense of community and identity within the college. In 1894, the Canterbury College Students Association (CSSA) was established as a body of representation for students in academic and recreational matters. In attempts to bolster student identity and sense of belonging, the CCSA gave existing clubs and societies a chance to be represented in College and Association discussions.

In 1897 the Canterbury College Review began publishing as a voice of students, clubs and staff. This began the ongoing tradition of student-run publications.

The turn of the century saw the development of the CCSA from a voluntary comradery between clubs to an organised and structured Association with a public profile in Canterbury and tangible power in College matters.

1914-1919 brought World War One, and with it, great challenges for the College and Association. Hundred of past and present college men went to war, shifting the demographic and quantity of Canterbury students. The aftermath of the war also began a shift towards political and social activism on the part of young people in New Zealand.

The first election of nominated candidates from student membership to the Student Executive occurred in 1923. A vital change in the organisation and functioning of the Association, democracy and engagement now played a large part in daily student life. This was soon followed, in 1928, by membership of students to the CCSA becoming compulsory. While many questioned this change, the CCSA saw it as a chance to fully represent the student body.

Despite the fast and drastic growth of the Association, the organisation was still without a physical headquarters. After proposing such to the University for years, a plan was put in place to award the Association with its first home.

Designed by Francis William Petre in 1883, Llanmaes House was of the Mock-Tudor style. The home passed through very few owners before the Canterbury College purchased it in 1926 to act as the Rector's residence.

After the swift growth of the CCSA and its clear purpose in student life, the College gifted the house, which neighboured the College on the corner of Montreal and Hereford Streets, to the Association. The first building solely occupied by the Association opened to students on the 5th October, 1929. 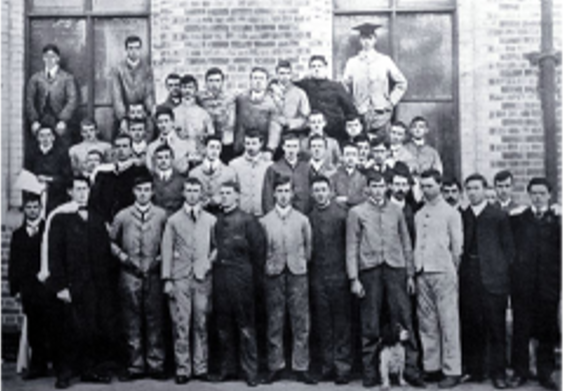 In 1930, CANTA began publishing as an alternative to Review. Many felt that Review was not political or social enough, and often lacked humour that students sought out. CANTA was able to be satirical, critical and more broadly attentive to students' lives.

Just as had happened in the early 1900s, World War Two severely impacted the student numbers and concerns from 1939 to 1945. It was clear in following years that student focus had been further cemented in social humanitarian concerns, leading to decades of student-led protest, activism and dissent.

In the 1940s, past student Ngaio Marsh would return to New Zealand after spending time overseas. Marsh became instrumental in the growth of the College Drama Society. Marsh strengthened the College in all areas of the arts, and would go on to be the namesake for the Association's theatres in future years.

In 1949 the CCSA changed its name to the University of Canterbury Students' Association (UCSA). This followed the College's own decision to rename itself as The Association. This re-brand signaled further growth and strength of the Association, which now sought to extend and renovate the central city building it occupied. Following the war, the University roll had significantly increased.

There was government support of all of New Zealand's universities to move to the suburbs, with Canterbury being the only institution to do so. UC began to explore alternative sites for their new, suburban campus.

1950 brought the first ever 'Orientation' celebrations similar to how we know them today. The events at the beginning of the University year encouraged students to look into clubs and social activities alongside their studies, balancing academic, social and recreational activities.

The Warren & Mahoney designed, Modernist-style Ilam Student Union opened in 1967 as part of the quickly growing Ilam Campus of the University of Canterbury. The building held a cafeteria, theatre (named after Dame Ngaio Marsh), retail and support services. This started a legacy of purpose built, all-encompassing student services on campus. In 1974 the Ilam Union building was officially complete after years of ongoing works.

Student activism grew even stronger in this era. 1972 brought over 6000 students to the central city to protest the Vietnam War. Two decades of protests followed including the anti-Apartheid and anti-Springbok tours of 1981. In 1988 the Black Wednesday protest mourned 'the death of free education', marked by students carrying a coffin through campus. These protest were nation-wide, but most often led by students.

RDU, the student-led radio station, first broadcast in 1976 as another channel of communication and recreation for UC students, accompanying the ever-controversial CANTA.

Supported by the social concerns of students and the introduction of Te Reo teaching at UC in 1972, Te Akatoki (The Māori Students'Association) became an associate to the UCSA in 1988.

Bentley, the cat who lived at the Ilam Union building, ran for UCSA President in 1993. Students backed their feline rep, who came a close runner-up. The UCSA would honour Bentley's legacy by naming a space in the Ilam building 'Bentley's Lounge'.

In 1994, the UCSA celebrated its centenary with a large function in the Ilam building, looking back at the history of the Association and looking forward to what may change.

The UCSA adopted its new logo in 2005, the nucleus design represented the UCSA as a central hub for student life, support and services.

In 2010 and early 2011, the Canterbury Earthquakes devastated the region. Bringing massive disruption of UC classes and activities, the earthquakes also inspired the establishment of the Student Volunteer Army (SVA).

After the 2010 earthquakes, the Ilam Student Union building closed and would never be reopened. 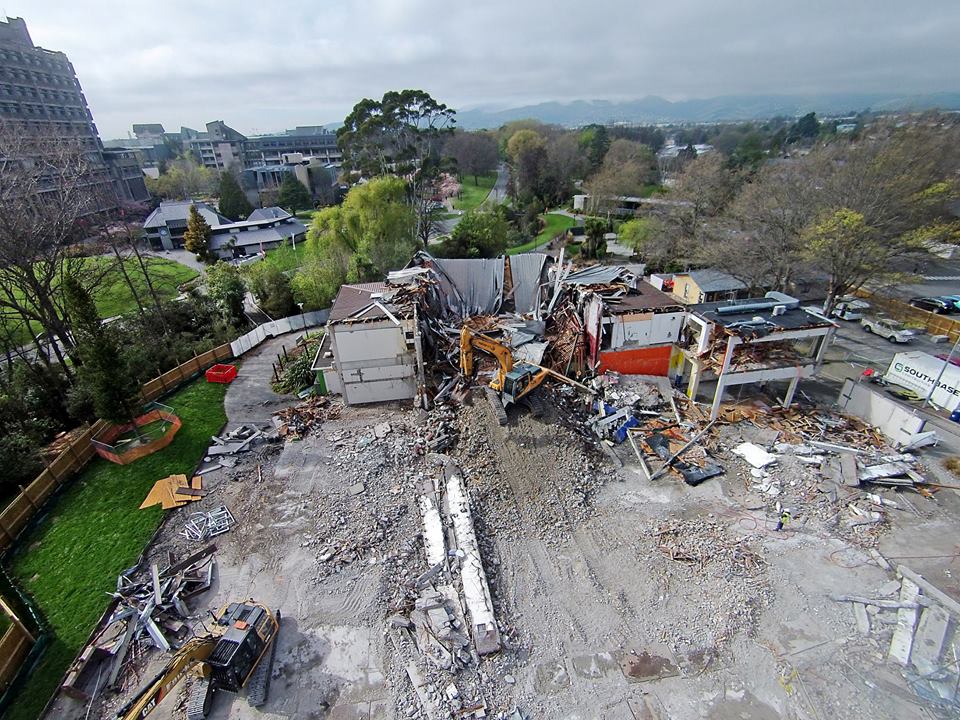 For almost a decade, the UCSA operated from offices located in Puaka-James Hight building and from The Foundry, "temporarily" located in the Ilam Road carpark. From 2021-2019 this venue held gigs, functions and operated as the campus student bar, keeping student social spirits alive following the Canterbury Earthquakes.

In 2011, after the February 22nd earthquakes, the SVA shoveled hundreds of thousands of tonnes of silt from the properties of Canterbury, serving the community and beginning a pattern of student-led social, environmental and cultural efforts, often supported by the SVA and the UCSA.

In July 2012, the infamous Savage concert crowd broke the floor in the temporary events space, and seven years later, in June 2019, Savage returned to The Foundry for its final show.

The UCSA Subsidised Dental Scheme was introduced in 2013, broadening the health and wellbeing services hat the UCSA was able to offer students. The Association's Food and Beverage services on campus was made an entirely in-house system, and the UCSA established an annual ANZAC service organised by the Student Executive and staff.

The 2016 demolition of the Ilam building formalised this period of a 'homeless' UCSA. University Council approved a business case for the new UCSA building and designs were made for a new student building on the same site. The ground was re-broken in 2017, ready for the construction of a new, improved and modern hub for students on campus.

2019 marked the 125th anniversary of the UCSA. Established early in the school year in 1894, the Association has grown in its ability to offer resources and support to all UC students.

The launch of the new UCSA logo in early 2019 marked the beginning of a new era for the Association. This new logo symbolises movement and purpose, reflecting the Haere-roa river that flows through the UC campus and alongside the brand new Haere-roa building.

Throughout May and June, during the final weeks leading up to the opening of Haere-roa, UCSA staff and Executive took clubs and supporters for tours of the construction site to prepare for the new chapter in the Association's history.

In mid-July 2019, the UCSA officially moved into Haere-roa. This building housed Semester 2 Re-Ori week, MONO gigs, clubs events and performances all within the first three months of opening.

On 27th September 2019, a large group of students gathered at Haere-roa and marched into the city centre for the School Strike for Climate, reflecting a history of student-led activism on environmental, social and ethical issues.

Haere-roa is establishing itself as the student hub on campus, offering the chance for all of the UC and Canterbury community to have a venue for events and activities.

Most importantly, Haere-roa is a home to students, to feel supported, welcomed, and engaged with their time at UC. The UCSA continues to offer the services it has developed over the years, now with a new, purpose-built facility that students can call their own. 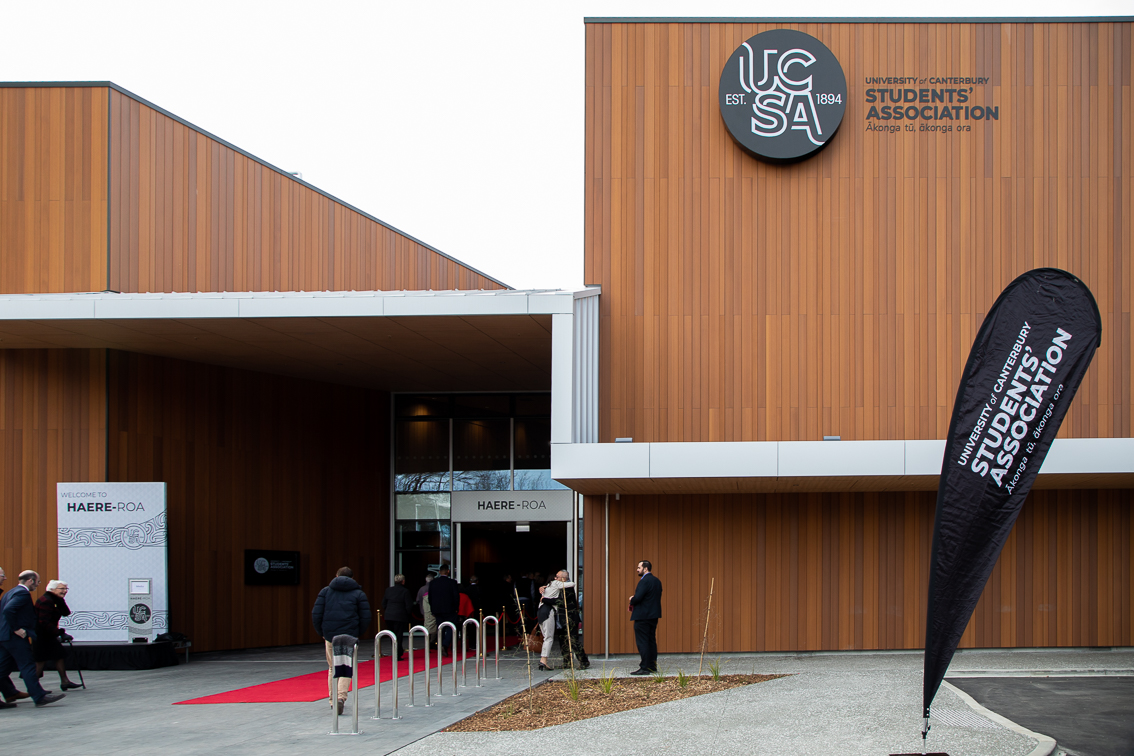 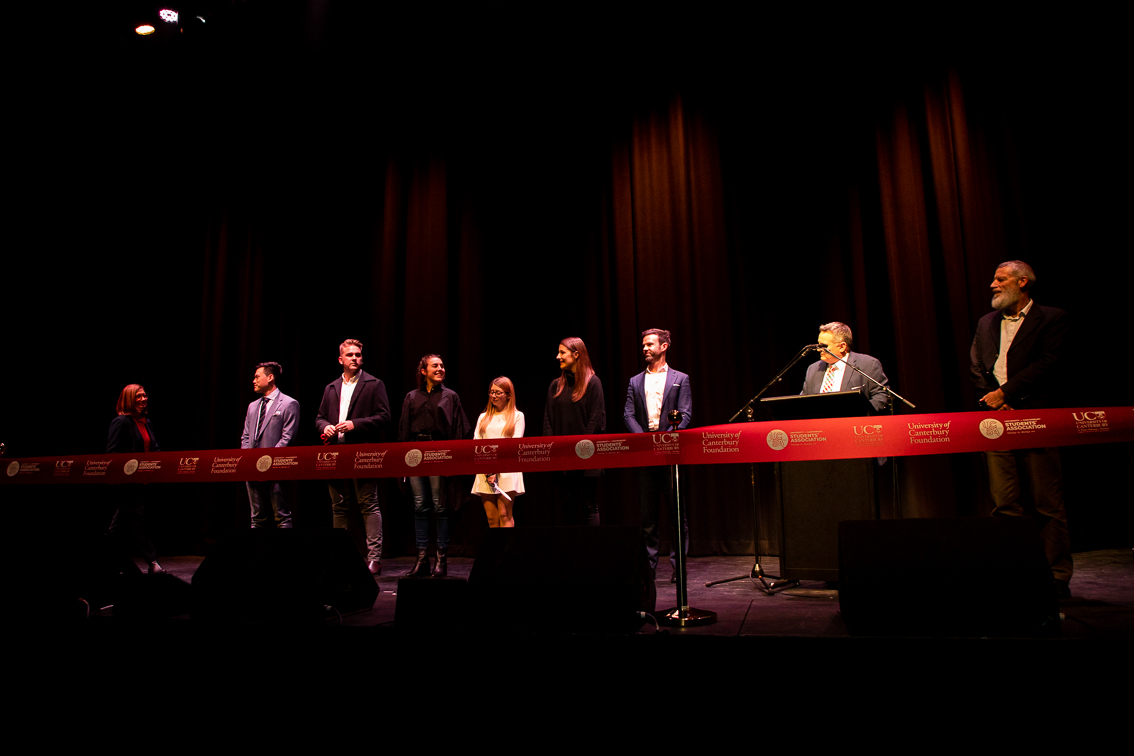 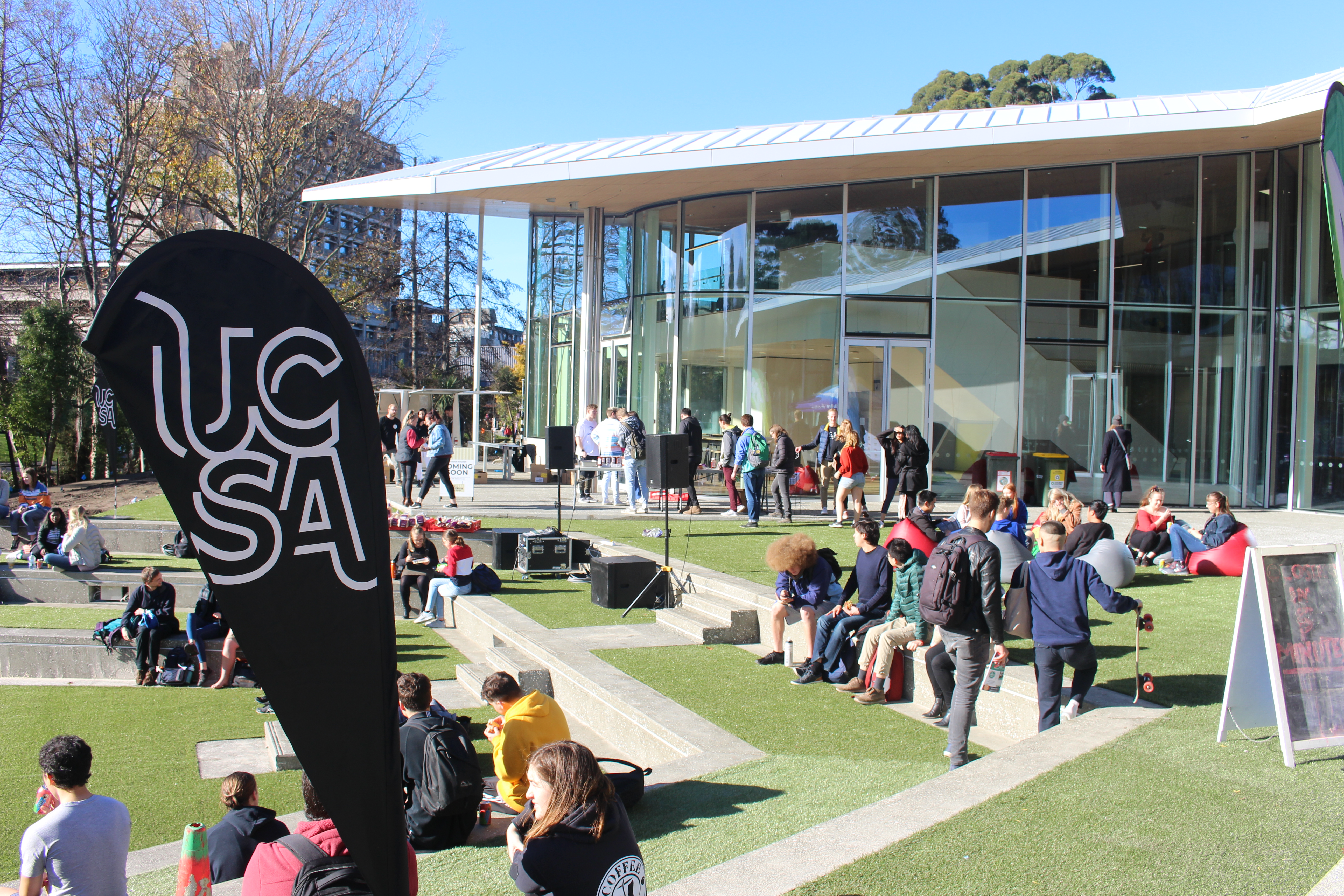